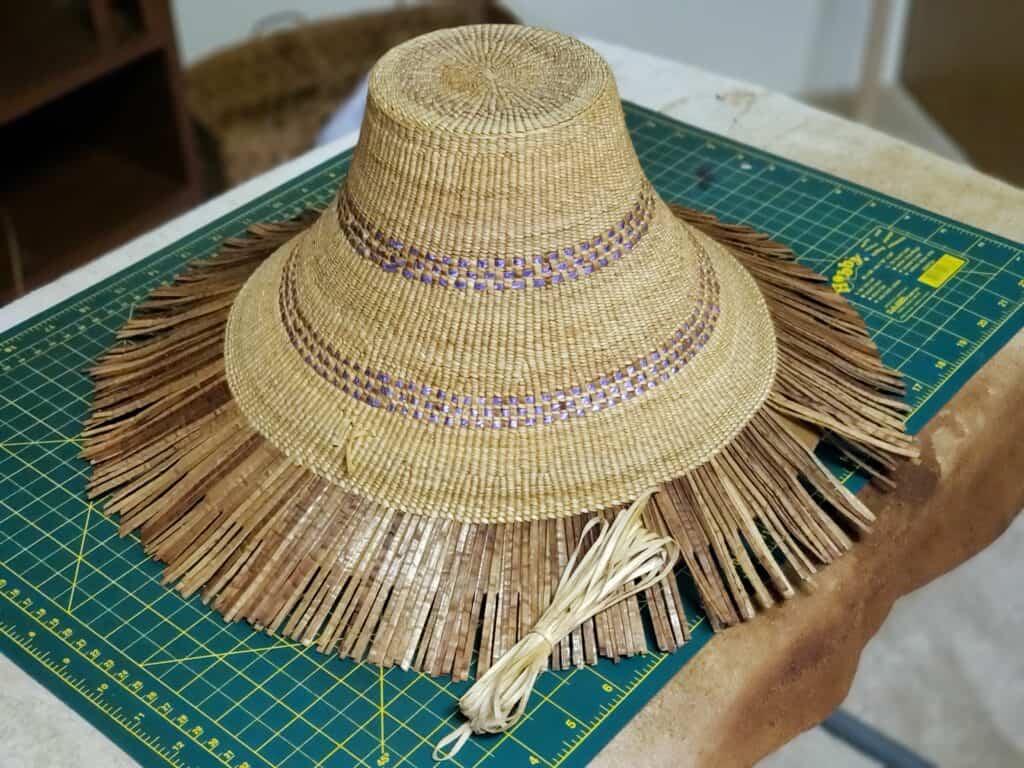 Kun Kayangas, whose name means diving or spouting whale, learned to weave as an adult. She started by going out with a group of friends to harvest Yellow cedar, which they gave to local weavers. In 2007, her cousin Christine Carty told her she had to learn how to weave. Christine was hosting a class, so Marlene joined it. As she tells it, she was the worst student: rushing her work, yet always falling behind. “It took me a whole year to do one hat,” she says with a laugh. “The elders said they were going to have a birthday party for the hat, it was taking so long!”

Her challenges were compounded when her son, working on a commercial crab fishing boat, was in a serious accident. Marlene started travelling regularly to Vancouver, where her son faced a long and complicated recovery. At night, alone in a Vancouver hotel room, she worked on her weaving. “I would just sit there and weave,” she said. “It gave me sanity and peace.” As he recuperated, she continued weaving, building on the skills she had learned from Christine and gradually developing a style that is all her own.

She started working with copper in 2010, after seeing a quarter of an inch wide copper bands in a store. They were exactly the right size, but she had to experiment to figure out how to incorporate them into the weaving. She now embraces a variety of materials for use in her hats, including ones that mimic the iridescent sheen of abalone shell, and subtle yet sparkling turquoises and purples. These “non-traditional” materials, worked smoothly into the cedar strips, make her hats unique and identify her work.

One of her latest feats is a hat woven with 23-karat Italian gold leaf, created after her husband asked if she could make a hat out of gold. She had to research the material, and then come up with a five-step process to incorporate it successfully. The hat – which took approximately 600 hours – was a triumph. She wore it to a potlatch and sold it almost as soon as she arrived.

Although Marlene works full-time, she dedicates her evening hours and weekends to weaving, and often opens her home to anyone who wants to learn. Contact her via email ([email protected]) if you are interested in ordering a custom-made hat or basket.