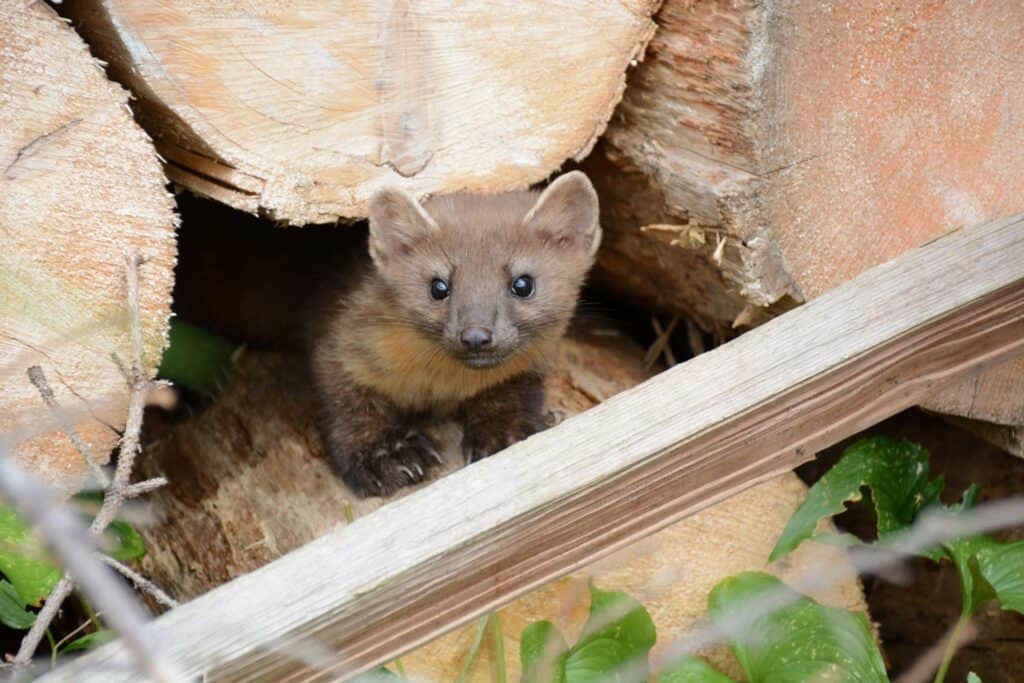 For decades Haida people and their allies have put themselves on the line to protect forests in Haida Gwaii. You might enjoy walking through some of these protected forests of giant k’aang Western hemlock, ts’uu Western red cedar and kayd Sitka spruce in places like Kiid K’iiyaas K’yuu Golden Spruce Trail, Aagang Guu Government Creek, and SkasxaalsGeikie Creek.

Protecting these stands is important because old growth forest supports a great diversity of species in high populations. Should you visit an old growth forest in spring, you can actually hear the difference. Old growth resounds with birds calling and singing.

While changes have made Haida Gwaii’s habitats leaner, they have set the table for one of its chubbier hunters. K’uuxuu Haida Gwaii Pine marten is a top predator in Haida Gwaii. On the mainland, when old growth is logged, martens usually suffer. But in Haida Gwaii, invasive species provide an abundant smorgasbord for the peckish predators, and on the Islands martens abound.

K’uuxuu have been isolated in Haida Gwaii since they were trapped on the Islands by encroaching glaciers some 20,000 years ago. As the glaciers melted the surrounding oceans rose and flooded the plain that once connected the Islands to the mainland. Through the intervening millennia k’uuxuu began to exhibit signs of a natural phenomenon known as ‘the island rule’. Islands often can’t sustain too many large carnivores. In Haida Gwaii the largest predator is Taan Haida Gwaii black bear. Additionally carnivores like lynx, wolverines, wolves and badgers are absent. The dearth of other large carnivores leaves plenty of room at the top of the food chain, and over millennia smaller carnivores can grow larger to fill vacant ecological niches.

In Haida Gwaii k’uuxuu have grown larger than any other marten species on k’adgwaa the mainland. Their more robust molar teeth are set in wider jaws than their mainland cousins. Beneath their snouts are thicker nasal bones that strengthen their skulls. An orange breastplate phenotypically distinguishes the mischievous mustelids. Over time, wider jaws and larger sizes have assisted k’uuxuu in their rascally endeavours. A seafood banquet appears each low tide and devouring it is not a task any weasel should take lightly. Stronger teeth likely help the loafy k’uuxuu supplement their diet with plenty of pelagic protein.

Usually able to squeeze into even the densest root-clod, k’uuxuu’s sizes have only expanded since humans have added invasive species to the menu. At the dawn of the Anthropocene k’uuxuu awakened for breakfast and found themselves hopping through a forest freshly decorated with small rodents. Squirrels, rats, muskrats, beavers and mice, wishing to sleep snuggly in their dens, awaken to find themselves trapped in a wrestling ring, facing off against the sumo of Haida Gwaii’s understory.

As if this fresh rain of protein were not enough, k’uuxuu have begun to supplement their luxurious diet with introduced k’aad deer. In Haida Gwaii k’uuxuu wait in trees above deer-trails, then pounce on the unlucky ungulates, bringing fluffy doom from above.

Scientists expect k’uuxuu’s plumper population may begin to affect tllga Haida Gwaii ermine and stads k’un Haida Gwaii goshawk because their diets overlap. K’uuxuu are very competent hunters, and as their populations grow during the times of plenty, they may be consuming more than their fair share. Growing concentrations of k’uuxuu also directly affect species like skaw Sooty grouse, which now find little respite from predation.

Keep going! You’re learning so much!