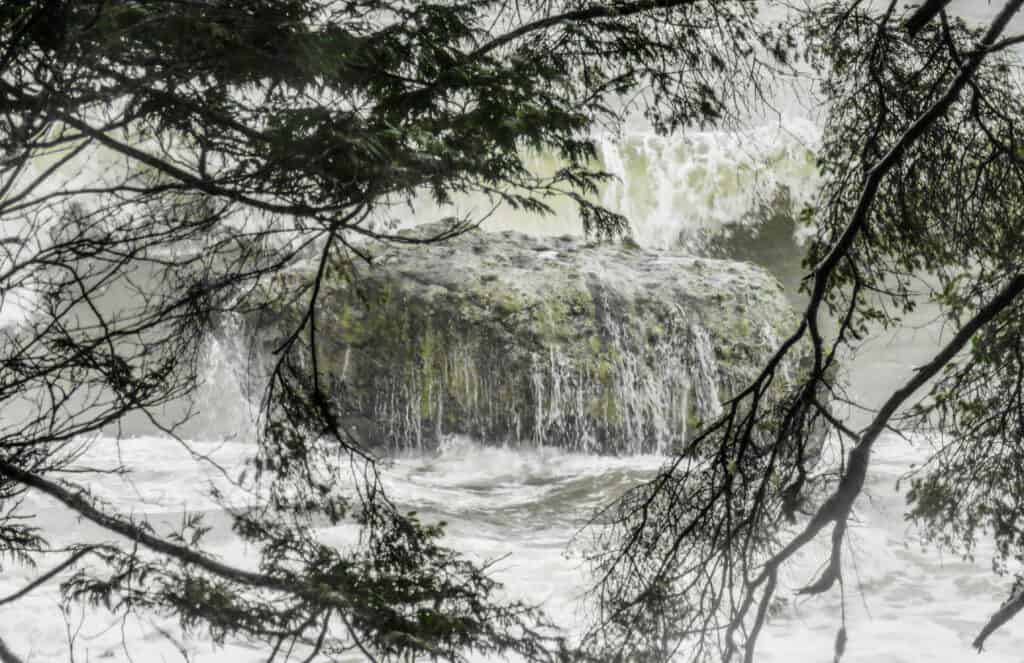 I open the door and the wind pulls me outside. The storm has arrived. I look across the inlet as the salty wind braids my hair into knots. The waves have started to emerge. Trees huddle in the forest. My heart goes out to the lonely green sailboat, anchored nearby. I hear the excited banter of the locals she has arrived.

I don’t mind if the power goes out. I’ve always welcomed darkness at this time of year. The company of a candle in such weather is as significant as a lighthouse for a sailor. The icy rain stings my face. The birds build up their nests like frantic craftsmen. I can no longer see the outline of Sleeping Beauty – she too is hiding, in a cocoon of heavy clouds. Snow covers her body, like a crystalline blanket over every crevice and peak of the mountain range. It feels as though the island is holding its breath, waiting in anticipation.

How can it be that a simple change of weather brings such tranquility? Isn’t it strange to feel peaceful when a storm blows? Is it just me, or do they excite all that live here? Do some fear them? Avoid them? Do some fall in love with them every time they appear, as I do? I would say that the majority of locals agree; a storm is our version of a movie theatre. We don’t live with constant convenience, in fact, we thrive with the inconvenience of a storm.

I suppose it’s a result of growing up here; storms are a way of life for us. The tide level rises and the rain falls thick. The deer and bear come closer to town to seek refuge from the damp and dark forests. Mudslides become more common than blizzards, and the faces of fishermen turn red from the Arctic fronts that sweep across this land.

The lights at the tackle store in which I work beep, and the power flickers once, twice and then goes out completely. I usually wait a few minutes to see if it will come back on before closing up. The wind howls and ricochets off the building, shaking the entire structure. I can’t help but grin. Dead leaves fly around the town, landing like organic decals. I smile knowing that many of us have stored milk in our freezers, for it is all too common that the ferry won’t come now.

The preparation involved in thriving on a coastal island during winter is non-stop. We have tarps to cover our bicycles and boats, gumboots and raincoats to wear daily, we carry flashlights in our bags and store candles in our pantries. Many of us harvest and can our own food, so when the ferry inevitably gets delayed, we don’t panic. The fortunate ones have a wood stove. The ones who don’t head to a friend’s home that does.

10 minutes have passed and I decide to close up shop. As I lock the door behind me and step out into the wind again, all of my senses awaken. I watch the boats violently rock among the white caps that pour over the breakwater. I smell the heavy scent of salt in the air and my ears start to ring from the cold. The wind howls and howls like a crying baby that won’t be coaxed.

As I get blown home, I think back to the storms of the past – we’ve had so many. They seemed so much bigger and chaotic when I was young.

In 2003 on Christmas Eve, a massive storm hit Haida Gwaii. It peaked right at the highest point of the highest tide of the entire year. That very day. The combination of the full moon and the winter tides created a storm surge, making the tide even higher than it ever should be.

In the early morning the weather didn’t appear out of the ordinary, but by 10 am the landscape had suddenly changed – as if into a foreign place. The east-southeast winds grew in strength until they reached 111km/hr. The clouds hung low in the sky and turned a menacing shade of gray. It was as if the day had a dimmer switch and the weather had a volume dial. Everything became dark and loud. Locals grew frightened and excited. As the hightide neared, each community had a front-row seat to the impending storm.

Then the ocean began to flood the highway in Tlell. Usually, the waves only ever reach the tree line at the very highest tide, but they don’t come over the road. Until now. Driftwood and foam tumbled in all directions as the ocean poured into yards, eventually washing all the way up to some front doors. The power went out. Vehicles were stranded and many people were trapped all day as the massive waves crashed over the highway and displaced driftwood barred the road.

Every household on the island has a different story from that day. Plum trees fell down in people’s yards. Little children shrieked in frantic delight and exclaimed their house had become a boat. Seaweed danced about the communities like kites let loose. Starfish and crabs speckled the beaches in an array of melancholy purples and reds. The gardens surrounding homes had turned into salty pools and one family even found a glass ball that had been flung into a spruce tree at Misty Meadows.

The ocean became a glorious mess and the wind grew so violent it made the island tremble for over 33 hours. The entire island shut down. Two parents in Tlell even braved the storm in hip-waders to rescue their sons from a friend’s home so they could spend Christmas together. The highway was too flooded to drive so they geared up in fishing attire and waterproof hip-boots to face the treacherous weather.

The wind continued to howl for the rest of the night, but the next morning, on Christmas day, the island was eerily still, with an inch of snow blanketing the land. The ocean was glassy calm as a lake. If there was such a thing as storm globes, it was as if someone had been shaking it for a full day and then suddenly stopped.

Most locals agree that the storm of Christmas Eve in 2003 is the most memorable gale they can recall. In fact, this kind of storm event has a recurrence interval of approximately 100 years, or an annual probability of 1%, as Ian J. Walker writes in his report about the coastal vulnerability of Haida Gwaii (Walker, I.J. 2007). It really is something to see your hometown turn into a messy, wild and stormy mayhem as the ocean rears up and encroaches far inland.

This particular storm had the highest recorded water level in Prince Rupert since 1909. On top of the extensive coastal flooding, Haida Gwaii endured meters of coastal erosion, damage to vehicles, buildings, and crucial infrastructure. Beachcombers found messages in bottles, glass balls, coconuts, fishing tackle, a zodiac boat, plastic from Japan and China, bamboo, parts of a plane, buoys, and hockey gear in the aftermath.

The beaches had the disarray of a war zone, as folks hunted for agates and glass balls. Sometimes one could see the lights of twenty different headlamps, drifting across the dark morning landscape, all on a sublime search for the next big find.

Many islanders still grow excited at the thought of that day. Many of us feel fortunate to have been part of such a natural marvel, vicarious as the ocean jotted itself down in history.

I have almost reached my cabin as the wind picks up again in Charlotte. I find it fascinating how the weather has become part of our collective memory here on Haida Gwaii. Even this storm is notching itself into the highlights of my month, or year.

The wind makes me more clumsy than usual and I think of all the nimble surfers with their boards and 8mm wetsuits at the ready in Tow Hill. I think of all the fishermen and sailors dreaming of easy summer tides and sweet breezes. I think of all the animals that knew this storm was coming long before we did. And of the artists on the island who are knitting or painting or playing music by candlelight. I think of all the beachcombers eagerly waiting for the winds to reach 70 knots in hopes that they’ll uncover new treasure. I think of all the children that must be looking out their windows and marvelling like I used to. Like I still do.

These are the moments I wish I had a camera, or a sailboat, or a kite. Even a balloon would do. But the storms are just as unexpected as they are awaited. I never feel fully prepared. Maybe that is partly why they are so enticing.

I continue onwards as the wind propels me home and I feel grateful to be a part of this.