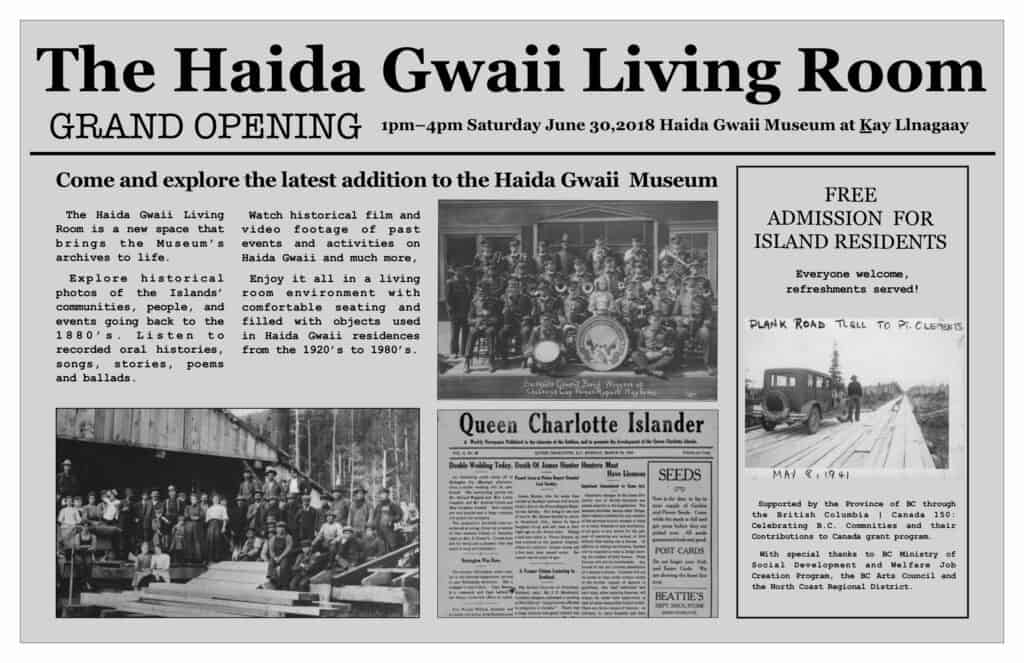 Nathalie Macfarlane relaxes on a soft grey sofa in the Haida Gwaii Museum, leafing through a photo album filled with pictures of islanders, taken from the 1890s up until just a few years ago. Early black and white photographs show individuals and groups posing seriously in the formal wear of yesteryear, while others show long-ago occasions like picnics and parades. Names and locations are noted in captions alongside the pictures.

“Going through a photo album is a much different experience than looking at photographs on a screen,” says Macfarlane, the archives and curatorial advisor at the museum. “We’ve noticed that people love to sit down and hold the albums and really get into the photos. People can share looking at a photo album in a way they don’t with a computer. It’s a very social experience.”

The photo albums are just one of the displays at the museum’s newest permanent exhibit, the Haida Gwaii Living Room. Located near the end of the building, the Living Room is a bright and airy space filled with everyday objects that are meant to be handled and examined, including old telephones, typewriters, newspapers and magazines. With two sofas, a coffee table and a couple of lounge chairs, the exhibit also invites people to sit back and relax – just as if they were in a neighbour’s living room. It’s a contrast to the usual museum experience, where people tend to stand attentively for long periods and expect to be somewhat uncomfortable.

“This is a welcoming space,” Macfarlane says. “You can sit down, look through photo albums, hear oral histories. We’ve basically decorated it and filled it with objects from Haida Gwaii residences from the 1920s to the 1980s. It’s kind of like the living archives of Haida Gwaii.”

There’s a spot where people can watch old film footage of events on Haida Gwaii, and another area where they can put on headphones and listen to oral histories. The walls are decorated with family portraits, some in ornate frames. Two china cabinets hold an assortment of treasures: small carvings in argillite and wood, a tiny accordion, delicate china plates and teacups. A striking quilt embroidered with Haida crests, made by a group of hospital volunteers in the 1940s, cozies up one of the sofas.

One of Macfarlane’s favourite things in the exhibit is a couple of issues of the “Queen Charlotte Islander” newspaper from 1911 and 1912. The original pages have been reprinted on large sheets of paper, so they can be handled and read easily. These old pages reveal a glimpse of the fevered pace of settler real estate promotion in the years leading up to World War 1, with ads and articles extolling Graham Island’s resources and farming potential. The December 30, 1911 issue contains Christmas dinner menus from a local hotel and restaurant (fried chicken, leg of lamb, prime rib of beer and turkey with cranberry sauce were on the menu at the Premier Hotel), and a report on how the holiday was celebrated in Queen Charlotte and Skidegate (“Christmas was Merry”) as well as more sobering news of a murder-suicide in Queen Charlotte. The newspapers also contain enough outdated terms and attitudes that the museum has posted a warning sticker on them, alerting readers that the racist and derogatory language does not reflect the views of the Haida Gwaii Museum.

“These early newspapers are fascinating, they reflect so much about people’s attitudes at the time,” says Macfarlane. “Parts of them are like a gossip column, and there is so much information here about all of the communities…. To me, these are really revealing, and really interesting.”

The Living Room opened in June 2018, after six months of preparatory work, but it’s an idea that Macfarlane and museum executive director and curator Nika Collison have been talking about since the early 2000s. Like any museum, the Haida Gwaii Museum has collected boxes and boxes of historical material over the years, including pictures, letters, and diaries. While these archives are technically available for the public to look at, people rarely use them, Nathalie said – they are hidden away in back offices and you have to make an appointment to look through them.

“The idea was to bring our archives – at least a portion of them – out into the public and make it a comfortable space,” she says. “We can endlessly update it, by bringing out different photo albums, for example. It’s only going to get fuller and richer.”

The museum’s archive of photographs started with a collection of 2,000 or so pictures that were put together in albums and donated by local historians Kathleen Dalzell of Port Clements and Howard Phillips of Masset back in 1976, when the museum opened. The collection has grown since then and now contains about 10,000 photographs. These pictures will be rotated through the Living Room in albums, and will also be available for viewing on the museum’s website.

For Cherie Wilson, the museum’s assistant archivist, it was unexpectedly moving to come across a family connection while working on the Living Room exhibit. She points to a large portrait of Lottie Young hanging on the wall. “Lottie was a relative of mine,” she says – something she didn’t know until recently. “That was my favourite part about it, finding out new information about things through old photos.”

One unexpected benefit of making the photo albums more accessible, Wilson says, is that people come in and recognize relatives in pictures where the people had been previously unidentified. She’s started putting out a stack of pens and post-it notes when elders come in, and urging them to add their knowledge to the albums.

Both Cherie and Nathalie have been gratified by the public response to the Haida Gwaii Living Room. It’s been rewarding to see how people have enjoyed handling the old objects, and how the objects and photographs have triggered more memories and stories.

“The flow of knowledge is so alive here,” says Macfarlane. “It’s not true that things are dead. There’s always a new story about an object.”